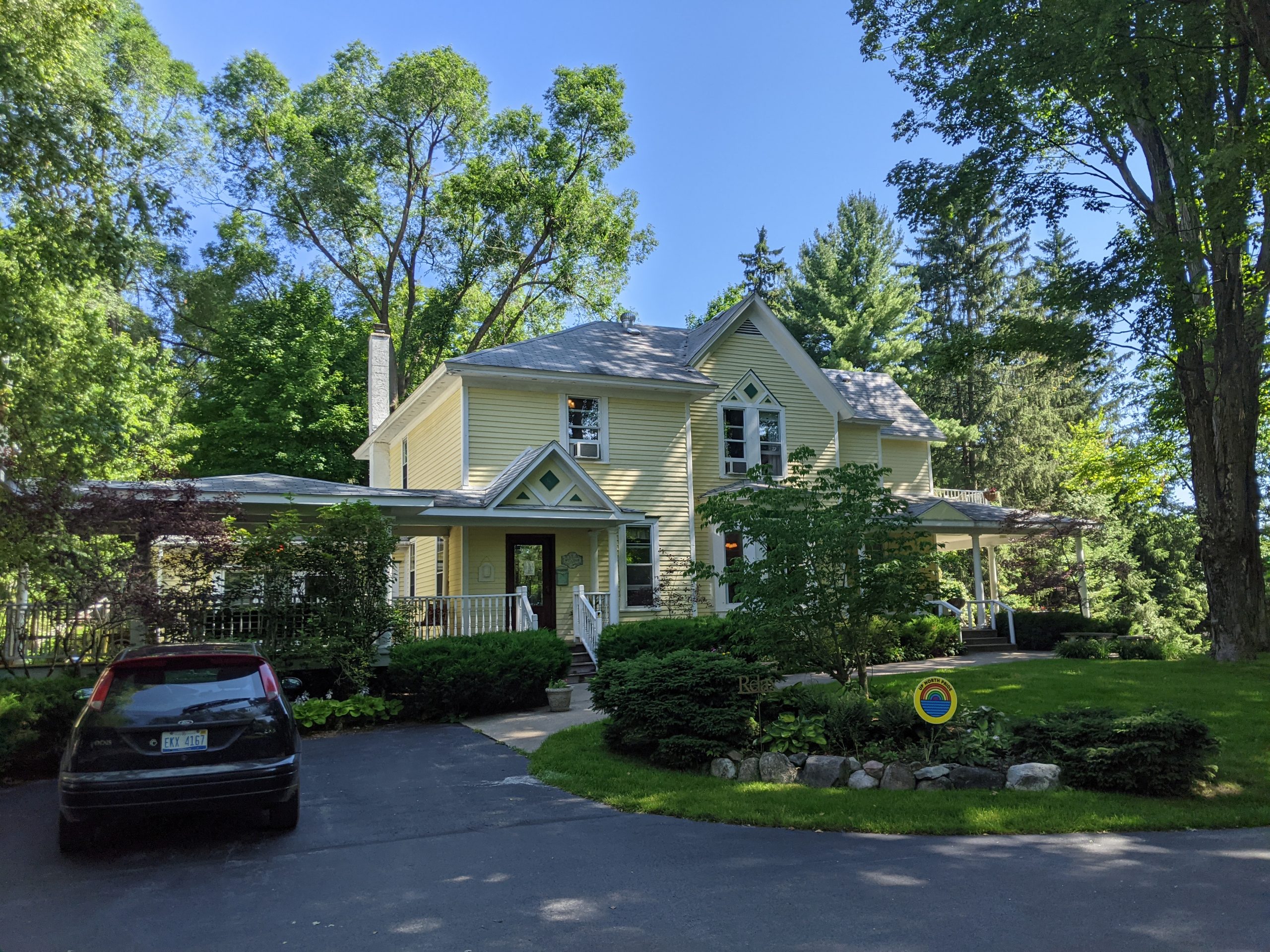 Cate and I honeymooned in St. Ignace and Mackinac Island 23 years ago this week. At the time we said we’d go back every year, but we didn’t. We started going back every year several years ago, and now that we’re more established we can usually afford to spend the night on the island, which is pretty special. I love it there when it’s quiet.

This year Cate went looking for reservations and there were NONE available for our actual anniversary, so she found a nice room a couple weeks before. It was at a new hotel for us, The Murray. It’s right downtown. It’s not as “elegant” as The Island House where we usually stay, but it was very comfortably Old, and I actually liked being right downtown. It was right across the street from our favorite restaurant (Smokey José’s), and ALSO right across the street from the boat dock.

Let’s dive right into some pictures. It was super grey that day, but didn’t really rain.

The buildings on the island tend to be very close to each other, there’s not a lot of space. At first I was disappointed by our view, but then I realized it let in a TON of light, and no-one could see in!

Even though we’ve taken the horse drawn tour dozens of times we always take it anyway. Here are our patient horses waiting to take us.

The first half of the tour is drawn by two horses. The second half uses a larger carriage and three very large draft horses. This is the largest commercial carriage in the world.

On the back side of the island is Arch Rock. It’s been there for hundreds, if not thousands of years, but geologists say it could crumble in the next couple years.

On our actual anniversary weekend we decided to go back up north, but not quite as far as Mackinaw. We spent the first night in a little Bed and Breakfast in the town of Bellaire. Bellaire is the home of Shorts Brewing. I’m not usually a beer guy, but they had some good ones, and their pizza was to die for. They also had big gnarly earthenware mugs that held a LOT of beer.

After we left Bellaire we headed to the Northern Latitudes distillery. It’s a little place that’s so small they can’t distribute, you have to go there to buy anything. But Cate heard they have Horseradish Vodka, and she wanted to try a Bloody Mary with it. It sounds awful to me, but she said it was AMAZING.

The only whiskies they had were bourbon and moonshine, which I didn’t like, but the spiced rum was GREAT.

After leaving there we meandered west toward the Leelenau Peninsula, stopping in small cute towns when we wanted. We had a hotel reservation in Frankfurt and that turned out to be a very nice place. Rustic, but with a giant hot tub in the room. There was also a sauna in the room, but we didn’t fire it up.

We went to Cate’s favorite restaurant, The Fusion, an Asian fusion place.

Back to Mackinac Island!

While we were traveling on Sunday, Cate just peeked to see if there was anything available on the island, and there was! We talked about whether we should impact Monday that way, and whether we should spend the money, and by the time we decided to do it, the room was gone.

Later that evening she checked again and there was another one! So we went for it.

We stayed at the Murray again, and since it was just an overnight we didn’t do most of the island tourist things we usually do. We went to The Carriage House, which is a restaurant/bar right below the Grand Hotel and watched the last 10 minutes, and then 2 overtimes, and then the final kicks, of the England/Italy game. Even though I don’t care that much about sports, it was really fun being in there with all those people who did care. Here’s where Italy won:

We stopped by Smokey José’s again, and then in the morning had breakfast were we always do, the porch at The Pink Pony.

All things considered, this year was one of the best anniversaries I think we’ve ever had.